Riroriro are among few native forest-dwelling birds to have adapted and thrived, since New Zealand was settled by humans and their suite of introduced mammalian predators. They live in a wide range of habitats throughout the country, predominantly in bush or scrub.

These tiny birds weigh less than a $1 coin!! They are dark grey above, whitish underneath, and have a startling red eye. Male riroriro have the loveliest wandering, warbling song, very often heard just before rain. They are kept very busy singing on the Coast!

Because of their small size and drab colouring, grey warblers are hard to see. They don’t often get close-up, like fantails or robins. I have sometimes seen them under my veranda, collecting spiders, caterpillars and beetles from the rafters. In winter they often join flocks of brown creepers, along with silver-eyes and fantails, moving together through the forest canopy.

Grey warbler nests are very beautifully made. They hang down from twiggy branches like a small, mossy rugby ball, and have a small entrance in the side, usually covered with a built-in porch. They start breeding in August, with a second clutch in November. Sometimes a shining cuckoo will lay an egg in the nest of the second clutch, leaving the riroriro to repair the damage, and incubate and raise the hungry cuckoo chick. It is surprising that grey warblers continue to be common; I think the cuckoo lucked out on picking this species to raise its young, thus ensuring its own species’ survival.

Riroriro may be heard singing at any time of year along the Croesus Track. See if the rain comes after! 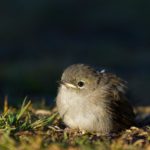 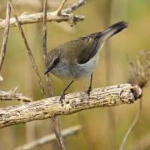